K-CAPS: Some history with HPMC capsules and dietary supplements

When HPMC capsules first hit the main-stream supplement market in the mid 90’s, I was an encapsulation operator, running high speed Bosch filling equipment for a contract manufacturing company. We were an experienced group, running three shifts, and producing over a billion capsules annually. Our operation at the time was attuned to running gelatin capsules at maximum machine speeds, and aimed for the highest possible quality.I remember when our production manager brought in some new capsules for us to try, they were called “veggie” capsules.

The capsules were plant-based, instead of the animal-based gelatin we were accustomed to using. Immediately noticeable upon inspection was the difference in appearance. We held them side-by-side next to gelatin capsules and the difference was night and day. Even when empty, veggie-caps did not have the crystal-clear, highly-polished look which gelatin capsules had; rather, they were cloudy and dull in appearance, and even had a rough exterior texture could be felt by hand, distinguishable with your eyes closed. 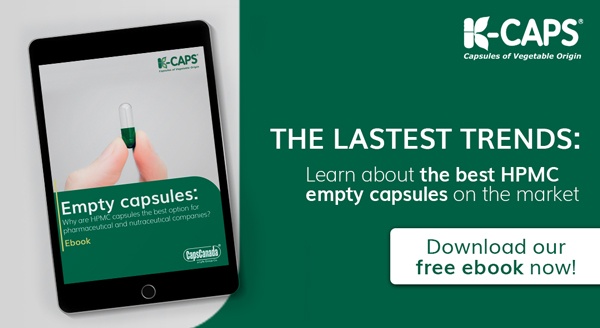 The immediate challenges regarding "veggie-caps"

As we began running these “veggie-caps”, as they came to be called throughout the industry, there were immediate challenges. The capsule wall was significantly softer than a gelatin capsule, which resulted in a greater tendency for dented-end defects. Additionally, they were slightly smaller than standard capsule sizes, and therefore loose in the filling machine tooling. The loose fit of capsules in tooling resulted in bad join defects (splits and tucks). This eventually led to the design of special veggie segments which had to be purchased and installed on the machine when running these capsules. Even with custom segments, a higher rate of defect was expected when running the veggie-type capsules.

The veggie capsules also frequently exhibited “wet spots” inside the dome ends of the capsules which only became apparent when filled with product. The wet spots were caused by excessive amounts of internal pin lubricant which was needed to strip the capsules from the mold-pins during empty capsule manufacturing. As you may imagine, with all of these challenges, the veggie capsules were not at all popular among filling machine operators, as they wreaked havoc on our expectations for productivity and quality.

None of us then guessed, what an impact these new capsules would have on the encapsulation world, as twenty-five years later, they have become the dietary supplement industry standard. And little did we know that following some advancement in manufacturing technology, they would not only run as fast, but even exceed performance standards over gelatin in some important ways.

A weakness in using gelatin as a capsule polymer is its tendency to lose moisture. This can occur through exposure to temperature higher than 77 degrees Fahrenheit, or relative humidity below 35%, and at any point from empty capsule manufacturing through packaging and distribution. An even greater contributor for moisture loss is from the fill material itself. Hygroscopic products will dry the gelatin capsule from the inside out, and will cause cracking, most prevalently in the cap shoulder region.

As an encapsulation operator, extra care had to be taken to minimize exposure of the capsules, particularly during winter months when building HVAC equipment would supply air below 20% relative humidity. In these conditions, and with hygroscopic powders, capsule brittleness was a constant threat.

With the introduction of HPMC capsules, manufacturers found a real benefit in their ability to withstand higher temperature, lower humidity and the effects of many hygroscopic powders. But the greater hurdles of making veggie capsules work on high-speed filling equipment remained a hurdle for several more years.

The greatest advancements in overcoming runnability challenges in HPMC capsules were made in CapsCanada’s Barranquilla, Colombia manufacturing facility. It was there that proprietary methods of manufacturing along with newly developed blends of raw material resulted in a capsule that could compete head-to-head with gelatin; these newly developed HPMC capsules were called K-CAPS®.

In terms of appearance, K-CAPS were nearly indistinguishable from gelatin capsules. A good friend of mine, and pioneering engineer of K-CAPS®, the late Guillermo Cifuentes, would relate jokingly that there were some early customers who thought it impossible that these were pure HPMC capsules, and they somehow must be gelatin capsules placed inside a veggie capsule carton.

Guillermo enjoyed sharing the travails encountered in trying to get the capsule to run smoothly on filling equipment and was very proud of the collaborative efforts of his team in making a veggie capsule with superior tool-to-capsule fit (eliminating the need for special segments), capsules which have strong walls and domes, and which offer the level of high performance that the market had come to expect from running gelatin capsules.

Today, I am proud to represent CapsCanada and their K-CAPS® brand HPMC capsules. It is not difficult to remember as an operator the challenges brought about by early veggie capsules; and I am grateful today for those who made the vast improvements which so many now enjoy!

See all
Back Blog Listing